for a week or so now there has been a new, very virulent meme on all kinds of blogs, twitter and other social media in germany. this was all started with a picture of a poster on flickr. this was passed around fastly and caused flashmobbers on twitter et al. to gather at the event announced on the poster depicted below. 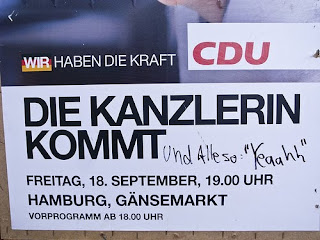 on the night when merkel appeared in hamburg she was accompanied by this loud flashmob screaming "yeaaahh" after each scentence she spoke. this was carried on by netizens all over germany. today in wuppertal it was especially loud and gruelling for the german chancellor trying to speak about her policies to members of her party and other citizens who had come to see her speak.

it is important to note that her government is responsible for the new internet cencorship laws, data retention and questionable laws for security restricting civil rights. biometric passports and the three strikes law we already know from countries such as france are some other examples. merkel's party the CDU alredy had to face up to a failure due to the german pirate party registering domains with their campaign slogan "wir haben die kraft" (we have the strength).

they spent thousands of euros on online campains that are not very effective. their consultants did not even think to register the main slogan themselves.

the issue behind the "yeah" flashmobs is to show a strong presence of the internet and of course pirate party. german politicians of the established parties are mostly internet-illiterate and prefer restricting the net instead of trying to learn about it.

here are some examples of the flashmobs that have been all over the german media:

this meme is virulent, fast and effective and could be called the german answer to the rickroll in an explicitly political context.

tomorrow on september 24th angela merkel will be attending the g20 summit in pittsburgh, pennsylvania. maybe it would be a good idea to greet this german lady with a friendly flashmob.